Why streaming is the best Anti-Cheat in MoH:AA right now

In the last months we’ve seen an increase of potential cheating and a few players were banned, read more on how streaming could be a solution to this problem... 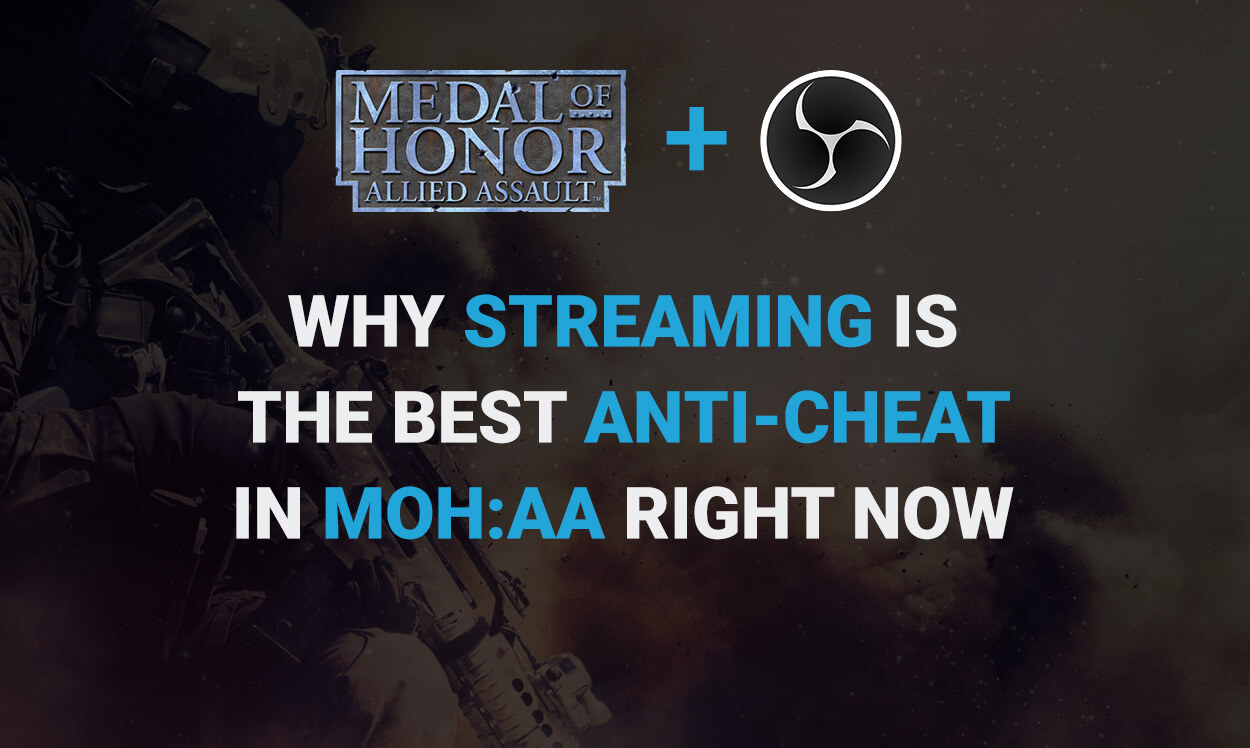 Medal of Honor: Allied Assault, alongside Counter-Strike, a game that was a pioneer in the FPS industry back in the early 2000’s and that defined an era for the upcoming games.

In 2020 and due to the Covid-19 pandemic, the game has seen a 500% increase in activity with many old-school players installing the game once again to revive some old memories with their friends. While we surely all agree that being competitive is what thrives some of the old-school players, some players just wanted to have fun, play with friends and play some matches.

Due to the game engine being so old, finding anti-cheating measures can be difficult and the ones that exist are not 100% effective. Unfortunately this still gets abused by malicious players, which spoils the fun for most players.

In the last months we’ve seen an increase in potential cheaters and a few players were banned, which unfortunately is making people turn away from their beloved game once again. However I think there’s measures we can take to make the game almost cheat free. Especially for competitive teams who are playing to win every time. These measures, which I am about to explain, together with AlphaMac - the current anti-cheat can be a step closer to having a cheat free competitive MOHAA scene.

It’s 2020 and streaming has been embraced as one of the most powerful tools in the digital era. Twitch or YouTube are now places to look for information, share fun, enthusiasm and engage with other people, the fans and communities. Some players have used streaming as a way to ‘’proof’’ that they are playing a game legit, until someone figured out that it was possible to cheat in games such as CS:GO and Call of Duty even while streaming. This without being detected. I won’t go into much detail on how it’s done but the idea is pretty simple: you are playing a game, you have a stream program running and stream to your community, and while the cheats are visible to you as a broadcaster, your viewers won’t see any cheats. This is achieved through some very specific options in the streaming program, which fortunately for us can’t be achieved while playing MOHAA. At least visually. Let me explain to you how.

OBS (Open Broadcaster Software), the main program used for capturing what you are doing and then stream it to your audience, has several ways to capture your screen activity. The most used functionality to achieve this is ‘’Game Capture’’, which essentially finds the game you have opened and then broadcasts your gameplay to OBS. The other option you’ve got is the “Display Capture” which works similar to the Game Capture one but instead of just displaying your game, it displays your entire screen, including your Desktop and everything you do in your computer. You still have Window Capture but unless you are playing on a Window Mode, it won’t really work once you full screen.

MoH:AA doesn’t have a legit way to work with Game Capture, so you are only left with using Display Capture and this is exactly the point on why streaming is the best anti-cheat program MoH:AA has right now. While there are multiple ways to inject cheats in a game and not being detected on OBS, this process only works if you are using Game Capture.

For cheats to be injected in a game - they can be injected in many ways and not necessarily into the game process -, they need to see the game opened in your system and then for OBS to see it as a game, you need to use Game Capture to do it so. With this and with the right cheats, OBS will know what to show and hide what’s important and not. So why is this pep-talk relevant? Because like I told you a few lines above, MoH:AA doesn’t work with Game Capture and you can only use Display Capture, so this entire “cheating” process can only be done using Game Capture. So all in all, injecting or playing MoH:AA with cheats that grant you extra vision while streaming doesn't seem to be possible, at least in an easy way. Of course and knowing OBS is an open-source program, this can rapidly change in the future.

But now comes into play the question “ok João but I can’t stream because my PC or Internet is not good enough for it!” and that’s a legit question. Streaming and recording are 2 different things in OBS which have different CPU consumptions. Streaming is heavier to your CPU while Recording is more soft to your machine. MoH:AA itself doesn’t need too much resources so it shouldn’t be an issue in the first place.

Here’s a few things you can do in order stream your matches:

If you have a decent internet connection (at least 5 mbps of upload) and a decent PC build (at least 8GB of RAM for eg.) stream to Twitch or YouTube. There’s several OBS presets that allow you to play and stream at the same time which won’t cause any ingame lag or stuttering. There’s hundreds of tutorials on YouTube on how you can set up OBS even on specific CPUs so I would advise you to look up there for more information. Bottom line is, even with a low end PC for instance, you can stream without any issues. Still, I’ve made a quick video on how you can set up your OBS in order to stream pretty much without any ingame lag or stuttering.

While streaming to Discord doesn’t allow you to stream to a more wide audience, it’s still possible and can be used to stream to a close group of friends and in a more serious way, to admins in competitive matches. Discord uses very low bandwidth and way less resources than OBS so it’s extremely easy to stream your matches. In fact, it’s even more safe than OBS since you can’t even hide possible injected cheats. The only downside of this is the fact that Discord doesn’t allow you to stream MoH:AA with sound. If you play on Window Mode and use an app that puts it fullscreen, it will pick up the ingame sounds but if you play in normal full screen, it won’t work. You have to capture your Screen in Discord and the viewers will not hear any ingame sounds.

Recording doesn’t take up that much resources like streaming and it will mainly take disk space. You can even use the same settings used for streaming with the difference being that the higher bitrate you use, more quality you’ll get and higher file-size you’ll get in the end as well. Once again, there’s several videos on YouTube on how you can set up your OBS for Recordings only. Yet again, I’ve made a quick video on how you can set up your OBS in order to record pretty much without any ingame lag or stuttering.

You’ll eventually get a several GB file to which if you have a not so decent internet connection, will take days to upload. A way to fix this is to use one of the many free video editing programs out there and cut specific rounds or plays that you need.

You also got a nice way to cut out specific clips by using Nvidia ShadowPlay or AMD Instant Replay where you just need to press a key and it will create a clip of the last X seconds/minutes of the round/play you just made. This is very useful to do while playing and it will not create any lag or whatsoever in your side.

In both ways, streaming and recording, you’ve got specific options while you are setting up your OBS that will help you set it up so that your game does not lag or stutter. For instance, both AMD (AMD Hardware) and Nvidia (NVENC) have an option which will put the entire streaming/recording process on your graphics card, meaning it will not impact your CPU performance which is usually what games use more. All the modern graphic cards have this option and it will help you on your gameplay with the sacrifice of a bit quality on your stream/recording.

How does all of this help us in a cheating investigation?

Each player is required to record with OBS and store the file for 72 hours. A cheat investigation can be requested by the opponent within 48 hours. Once the investigation is opened, the accused player will then have 48 hours to upload the OBS file. If the internet of the accused player prevents him from doing so, he has the possibility to play his OBS file while sharing his screen with an assistant. Said assistant is required to record the shared screen with OBS, therefore he must have a good internet. This indirect way of sharing your ingame footage is very time consuming and should only be requested by an official admin.

To wrap this up, streaming has become a standard way not only within esports but in the gaming community as well. It provides a way for viewers to see the best players, matches inside their respective communities and in this specific case, it helps fight cheating, mistrust and the lack of confidence in the people. I know there's a lot of variables around this in order to make it work in the best way possible but there’s fine tweaks that can be done in order to allow you stream or record your matches in the best way possible.

Posted on 22 June 2020 at 19:01 by error from ScrimBase Crew
We have detected AdBlock. Please disable AdBlock on ScrimBase!

Enlighten us.. what is this vision?

And to add: if you want to counter a "lame claim" it might be worth considering being able to request xx amounts of streams per match. A bit like the challenge in tennis.

Sounds like a draconic measure with a high "lame" potential. We'll have to think about this, cause adding more and more actions to be able to play a game, might backfire.